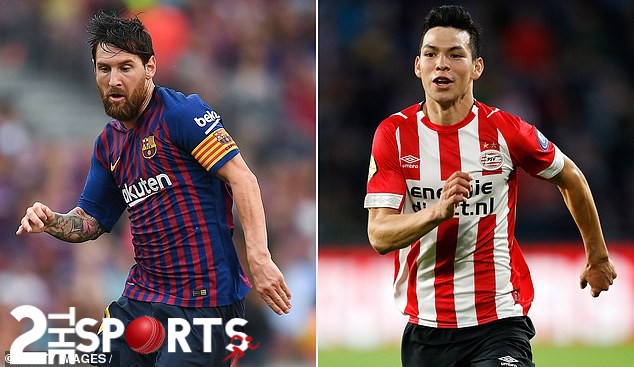 Champions League edition 2018-2019 starts with the bang of hattrick and a red card. Lionel Messi warned everyone who is in the competition. Lionel Messi hits a first fantastic hattrick of this season and that’s in the first match of champions league.

Barcelona’s Champions League battle started off with a blast on Tuesday as Lionel Messi made a hat-trick. The Catalan party dragged away with a 4-0 winning over PSV Eindhoven. The Dutch team had its opportunities in beginning and gripped the match tight in the second half. But then Barca scored three goals in the final 15 minutes.

Barcelona stepped out into the field with its strong squad. Dembele, Suarez, Coutinho, Messi, Pique, Roberto, Rakitic, Ter Stegan, Umtiti. At the 30th minute of the match, the first yellow card was given to PSV defender Nick Viergrever. In the next minute,  Lionel Messi scores the first goal of the match in the first half. Messi scores his first goal with the free kick which passes the PSV goalkeeper. The first half ended with the lead of Barcelona on the board.

Second half start with the yellow card at the 55th minutes an that was the first yellow card given to S. Umtiti in the match. After some time, another yellow was given to PSV striker Luuk de Jong. PSV control the game but that is until Ousmane Dembele showed his skills what he can do. At the 74th minute, Dembele scored a fantastic goal and give Barcelona 2-0 lead. After Dembele’s goal, Messi secured his second goal by a beautiful pass from Rakitic, setting it into the far side on the spot.

At the 79th minute, Umtiti did a foul again and get another yellow card which results in the first red card of champions league 2018/2019. Lionel Messi achieved his hat-trick in the closing minutes of the game, being sent into and completing with the ease.

That’s 103 goals in the contest of champions league for Messi in his career for Barcelona. That is truly an incredible number. Barcelona gets the best from its player and the team off to an excellent start in its most significant tournament. Messi’s hat trick gives Barcelona three important points to open Champions League.