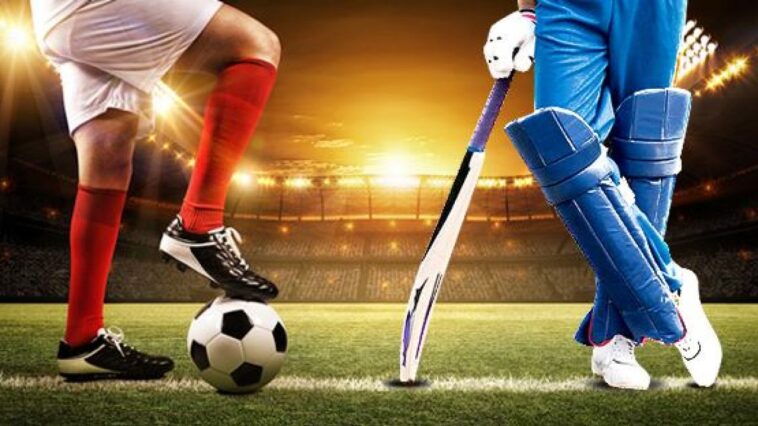 In this article, we will talk about, will cricket overtook football in upcoming years and how they started, and where they stand today in popularity?

Cricket gained popularity in past few years and keep on growing and gaining an audience in the world. And it is taking its time to grow but, in some countries, it is the most popular game. In Pakistan, India, Australia, West Indies, etc. Cricket first came to North America via English colonies back in the 17th century. It arrived in Australia almost as soon as colonization began in 1788 and the sport reached New Zealand and South Africa in the early years of the 19th century and after that, it started to spread in the world and has developed globally in the 19th and 20th centuries.

Football as we know it today started to develop in England back in the 12th century. The games that are similar to football were first played on the streets and meadows in England and it was way more rough and violent back then.

The game of football takes its form. The most admitted story tells that the game was developed in England in the 12th century. In this century, games that resembled football were played on meadows and roads in England. … This early form of football was also much more rough and violent than the modern way of playing.

The appearance of Cricket in Olympics:

In 1986 Olympics cricket was first introduced but later it was scrapped due to a lack of participants. Four years later in Paris cricket made a debut with four teams in it Great Britain, France, the Netherlands, and Belgium. Netherlands and Belgium withdrew leaving only two teams. That was the first and last match of cricket in the Olympics.

The appearance of Football in the Olympics:

Football was first introduced in Olympics in 1900 and 1904 as an exhibition sport and it became the first team sport in the Olympic Games. From 1908, this sport has been held at every Olympic Game except this one time in the 1932 Los Angeles Games.

Where does cricket stand right now?

Cricket might overtake football in upcoming years as it has grown remarkably in previous years. The number of countries that play cricket is 106 but only 12 teams are full members of the International Cricket Council (ICC) 94 Associate Members. Associate Members are countries where cricket is firmly established and organized but do not qualify for Full Membership. There are some associate members who based on their success rate in World Cricket League and were included in the ODI.

Where does Football stand right now?

Many countries play football and are registered with the Fédération Internationale de Football Association (FIFA). The total number of teams registered is 211. There are also many national-level tournaments played every year in many countries and they are world famous despite the fact that they are national tournaments.

Football is a very popular game in the whole world and it is known in almost every country. Football is also included in the Olympics but cricket is not except this one time back in 1900 in Paris.

As compared to cricket is far behind football but it is making its name in the world. International events like the ICC Cricket World Cup, T20 World Cup, or the Ashes Series are contributing to making the sport more popular with each passing year. Whereas football is already famous in the whole world. It will be tough for cricket to make its name in the top leading games in the world but I can be done with the right tools and strategies.

Importance of US in promoting cricket?

Cricket needs to gain popularity in the US to gain the momentum to spread even faster and make its name and take a spot in the top games in the world leaving football behind.

Over the past few years scholars, journalists, and cable television reporters have increased the coverage of cricket to re-establish cricket in the United States.

Cricket is already present in the US but looks at football and how it grew in such a short time since 1994 and such method can be used on cricket too to make it popular. There are people talking about the idea of promoting cricket in the US for this cricket needs to extend its teams and but not many countries are interested in playing cricket because of the teams that are already playing for years and made their name such as Pakistan, England, India, West Indies, etc.

The US is a big country with many popular games like basketball, baseball, and American football. Baseball is the national game of the US but it’s not as popular as football. So if the US promotes cricket it might change the game and put it on the top game in the world but that will take years and a lot of planning.

Cricket was invented by English people and was the game of wealthy gentlemen who can afford the loads of equipment that are required. So that concludes that cricket is an expensive game and only a selective, few can afford it. Cricket is already a big sport and one day it will be a huge threat to football in terms of popularity but that will take time but we are not sure whether it will be as famous as football or not but that will be decided in time.